Making space for the primal nature of kids

At birth we are the buds, the tips of the tree of life. Our parents are the twigs on which we sprout, our ancestors the branches, and the boughs and trunk are as old as life itself. We are gifted with a precious heirloom, our jewel-like strings of genes. Worked and reworked through our long ancestral line, they determine both how we look and function and our potential. Three bright facets on this heirloom recently caught my magpie eye.

These facets lead me to believe that we come into the world ready for life in a natural, forest-edge setting, within a small human group, whose ways and skills we will learn through the medium of play. Yet what’s the reality for many of us? A hospital ward, a pram, dinner in front of the TV, outdoor play in a fenced, rubber-surfaced, metal and plastic forest?  Could this be why we sometimes feel so out of step with life? Why we suffer existential angst? Research clearly shows that depriving kids of play and contact with nature (and the magic that happens when both of these are present) is contributing to the epidemic level of childhood disorders, depression, obesity and allergies that mean that for the first time in recorded history our children’s life expectancy will be shorter than ours. In the face of this I often feel amazed at how much we have lost our way, strayed from the track. How we have forgotten that ‘as well as being modern, our children are from ancient beginnings, atavistic and primeval.’3 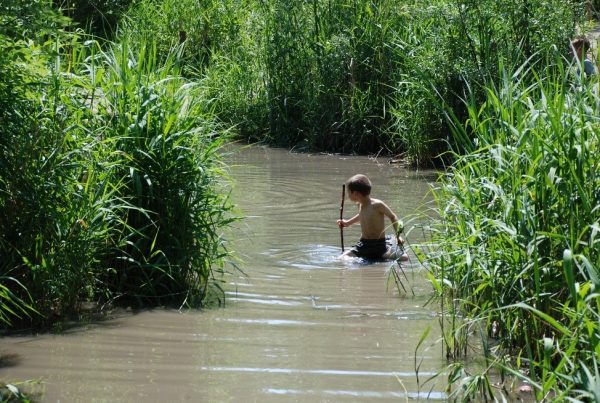 Stand still. The trees ahead and bushes beside you
Are not lost. Wherever you are is called Here,
And you must treat it as a powerful stranger,
Must ask permission to know it and be known.
The forest breathes. Listen. It answers,
I have made this place around you.
If you leave it, you may come back again, saying Here.
No two trees are the same to Raven.
No two branches are the same to Wren.
If what a tree or a bush does is lost on you,
You are surely lost. Stand still. The forest knows
Where you are. You must let it find you.

Our Pleistocene ancestors were adept at finding the way, being alive to the signs. If we could ask for their guidance might they take us by the hand and lead us to the words of Thomas Berry:

‘We must go far beyond any transformation of contemporary culture. We must go back to the genetic imperative from which human cultures emerge originally and from which they can never be separated without losing their integrity and their survival capacity. None of our existing cultures can deal with this situation of its own resources. We must invent, or reinvent, a sustainable human culture by a descent into our pre-rational, our instinctive resources. Our cultural resources have lost their integrity. They cannot be trusted. What is needed is not transcendence but ‘inscendence’, not the brain but the gene.’4

Returning to the image of the tree, if we are the leaves and our children the buds, then it seems that our culture has shot upwards so fast that we have uprooted our ancient ancestral tree. We need to look down, tend to those roots, and pay heed to the instinctive resources that rise up from them.

To encourage us to consider that descent, that journey of ‘inscendence’, we can listen to the life experiences of the few surviving hunter gatherer peoples still living with their genes, culture and environment in harmonious balance, their children playing free. They may not understand our questions on ‘making space for nature’. They are nature, the same as the forest. They feel their fittingness on earth. They do not share our idea of a separate self, living in the space made by nature, and hence don’t experience the existential angst felt by many of us. Having never made an ascent away from their genetic roots they have not suffered a schism between their instincts and the reality of their lives.

This is the way we lived for the vast majority of human existence on earth and our affinity for it is only lightly covered over by our recent history. In the work to peel back that covering I find it particularly inspiring to work with children. While adults show resistance and find rational excuses to avoid such engagement, kids are often ready and eager to rip the cover off and dive into their ancestral skins. It meshes perfectly with their innate biophilia and instinctive drive to play. It is vital that we create places which allow children to explore and connect with these deep aspects of themselves.

In Wrexham, locals have been running ‘The Land’, a natural adventure playground which is the star of a new film (http://www.thelanddocumentary.com/). It shows that ‘for special places to work their magic on kids they need to be able to do some clamber and damage. They need to be free to climb trees, muck about, catch things and get wet. We need to recognise the humble places where this alchemy occurs.’2  They do not need to be big, expensive affairs. Second-hand lands, hand-me-down habitats, the unofficial countryside provides ideal settings, woven into the fabric of our neighbourhoods. 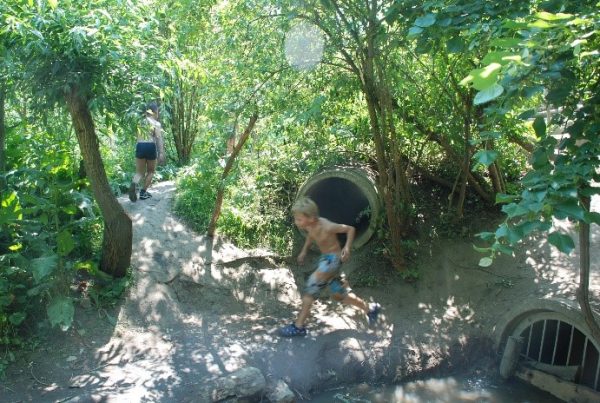 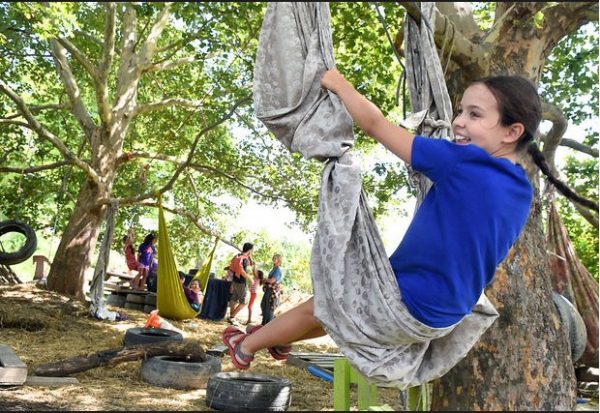 ‘During most of our history when children have been left to their own devices they flee to the nearest scrap of wild place. To play unobserved by adults.’2  That’s what we did when I was growing up – outdoor scrounging, spontaneous adventuring on rough ground. My roaming range extended five miles along the coast or railway line to the local town.

In the current climate of fear for children’s safety, this kind of freedom has evaporated. Play habitats now need to be close at hand, places kids can flee to on foot or bike, with the permission and trust of their parents. The current buzz around making our towns and cities more ‘playable’ is a move in the right direction. It also fits perfectly with existing ideas about encouraging wildlife and biodiversity back into our neighbourhoods through the creation of green corridors peppered with natural habitats. In permaculture terms they represent a stacking of functions. Children and nature are good for each other. Playing children help preserve unkempt patches by giving them local meaning and value. Nature meanwhile fosters all that is unkempt, feral and instinctive in the child. It may be a stretch of imagination, but for all we know the woods and trees may miss the clambering hands and feet of young humans. The stream may mourn the loss of dam-making and Pooh sticks. These places are old enough to remember times when human children were as at home in the woods as squirrels or crows.

The beauty of play in nature is expressed by Paul Shepard:

‘Trees are perhaps the most important plants in the lives of children. Because of our forest origins we have an affinity for trees, a tendency which is virtually compulsive in childhood and shared with most other primates. …. It would be hard to overestimate the degree to which trees give internal shape to the space in which the child plays. They are on the one hand like great, protective, benign adults whose whispering and lightly percussive tremolo is like the humming of a kindly aunt or uncle. On the other hand trees structure space as though it were a labyrinthine underworld, where hiding is like survival itself. Trees were made for climbing, a return to quadrupedal motion, touching a chord in our genetic memory of an arboreal safety. The rough texture of bark against the chest and arms, the smell reminiscent of a time so long ago that we still had whiskers, the gift of nests and fruit, the green galleries and corridors, the vestibular possibilities in being rocked by the wind or bouncing on a limb are part of my own childhood recollections that go deep. Building tree houses like nests, like the spectacled bears in South America or chimpanzees in Africa making platforms, prompts delight at the thought of sleeping in treetops.’1

In these natural spaces where children are free to follow their instincts, ideas and interests, they often gravitate towards practising ancient survival activities like shelter building, foraging, fire lighting and cooking, exploring the land, hiding in bushes, play fighting, and nurturing babies. 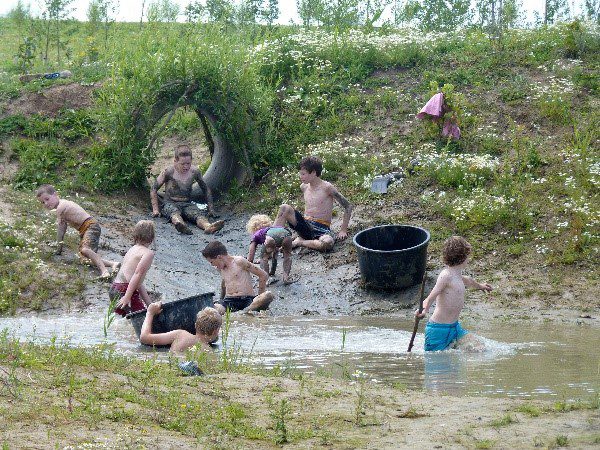 A closer look at one of these activities, shelter building, reveals how kids are drawn to huts or bushes with protection overhead and permeable sides that enable viewing out. Long ago this would have afforded protection from being eaten by large beasties, and this survival instinct is still running in the ‘background programme’ of modern kids. They are also immersed in a kind of research, collecting and analysing experiences, putting things together in new and different ways, experimenting and making mistakes, building and testing their own ideas of what life is about. Lost in play they’re fluidly trying to match what they need at that moment with what the environment has to offer, taking ‘the pulse of both the organism and the planet.’3  They are thus given opportunity to express their primeval, biological selves and satisfy their evolved genetic instincts and needs. This magical, mercurial activity is a driver of evolution that’s helped humans see changes coming, creatively and playfully grapple with them, develop adaptive strategies and so avoid stagnation and extinction.

Kids playing freely in nature looks on the surface like a simple activity, but on a deep level they are tending to their own well-being and the well-being of their species and culture.

This article was first published by Permaculture Magazine in 2014.